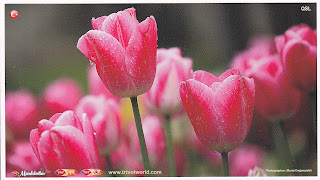 Voice of Turkey was logged on 6 November 2015.  An Italian language broadcast with frequent station IDs, news, Question of the Month and Turkish pop music  was observed from 22.30 till 23.00 UTC. At the top of the hour, a broadcast in English began, then transmission ended abruptly. To the best of my knowledge TRT had neither Italian nor English broadcasts scheduled at these times, yet the station was heard. Snafu?

Transmission of the Voice of Turkey was received well on 9.610 kHz with a (SINPO) of 44444. The only apparent issue was co-frequency interference from CNR, along with minor and occasional fading. Despite these conditions, reception was good and audio clear. 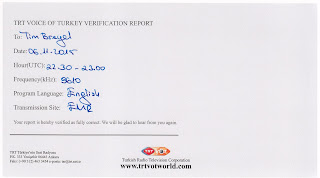 Reception report was emailed to the Voice of Turkey on the following day. QSL card arrived in the mail on 8 December 2015.