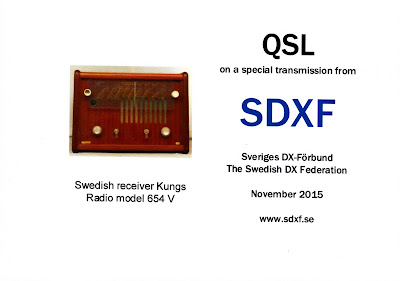 Swedish DX Federation*, using the facilities of Radio Nord Revival in Sala (Sweden), was logged on 28 November 2015. A selection of oldies music and talk, hosted by a male DJ speaking Swedish, was observed from 18.15 till 18.45 UTC (broadcast time 18.00 till 19.00 UTC).  The transmission of Swedish DX Federation on 6.105 kHz was SINPO 33433 -- weak to fair signal strength and occasionally clear audio, despite severe station splatter from China Radio International on adjacent frequency (6.100 kHz)

Audio files of the broadcast were submitted along with the reception report on 29 November 2015. Ronny Forslund replied later in the day, stating: "Many thanks for your reception report. I am forwarding it to the Swedish DX Federation for verification and you will receive a QSL card by post from them in due time". QSL card arrived in the mail on 6 January 2016.