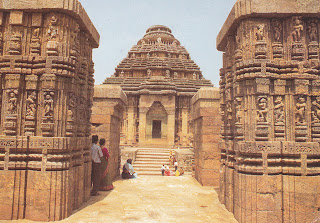 All India Radio Hyderabad, transmitting from the southern Indian state of Telangana, was logged on 3 August 2015. A Telugu  language broadcast of largely music was observed from 14.45 till 15.15 UTC. Reception  on  4.800 kHz was (SINPO) 22432 --  weak to poor signal with occasional clarity despite severe QRM from China National Radio 1, slight fading and atmospheric noise. Reception would have been better had it not been for CNR1.

Audio sample of this broadcast may be heard HERE.

Reception report was emailed and posted to Spectrum Management on the following day. K.C.SHARMA, DDE (SMS), replied with email on the sa,e day, stating: "Thanks for sending the RR on AIR Hyderabad programme.  QSL will be issued after verification of Proramme. You are requested to send more reports of various frequencies of Indian/ Foreign programmes. Thanks with regards." Along with his email he sent a photo of the Red Fort, which was depicted in my first QSL card from AIR. back in the early 1970s. QSL card arrived in the mail on 30 September 2015. 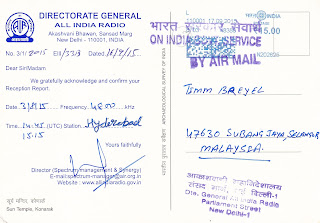