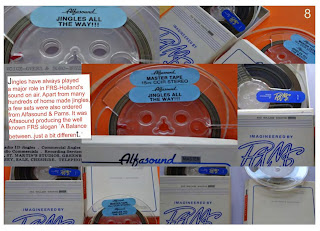 Free Radio Service Holland*, transmitting from the Netherlands, was logged on 30 August 2015. The English language segment of FRS Holland's 35 Anniversary Show was heard from  17.52 till 19.00 UTC, along with four additional broadcast hours, on the shortwave frequencies of 7.700 kHz and 9.300 kHz.

This special broadcast commenced with "Close Encounters of A Third Kind" theme song, count down and ID for FRS Holland in English. DJ announced a special broadcast commemorating the 35th Anniversary of FRS Holland on shortwave. DJ Paul Graham hosted the first hour of this FRS Holland broadcast, playing a variety of mostly 60s, 70s and 80s instrumental songs, which were occasionally heard on Radio Caroline, Radio Mi Amigo and Radio Veronica. Music tracks included "Eleanor Rigby", "Cruncy Granola Suite", "MacArthur Park", "Mi Amigo Radio", "hey Sister", "Radio", to name just a few tracks. A few advertisements were noted as well between songs, among these a promotion for an FRS booklet about the "30 Years of FRS Holland", selling for 5 Euros. At 19.00 UTC, the German language service commenced with 'banned songs', including the Sex Pistols "God Save the Queen". Transmission continued to be heard from remote SDR receiver for several hours, even well after 21.00 UTC. 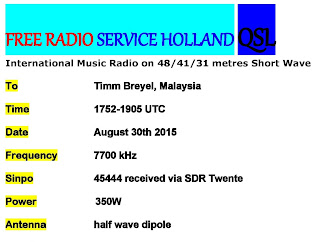 Reception on 7.700 kHz was (SINPO) 45444 -- fair to good signal strength with static present whenever minor fading occurred. Otherwise transmission was audible and clear. Transmission on 9.300 kHz was good too, but preference was given to 7.700 kHz which was heard well after 21.00 UTC. Neither frequency was received in Malaysia at any time during the broadcast, hence the reason for using the remote receiver in the Netherlands.

Reception report was emailed to FRS Holland the following day and posted in subsequent days. This eQSL was received on 20 October 2015, insomuch as FRS Holland strictly request US$3 or 3 IRCs to receive their paper QSL card.

*Remote SDR receiver at the University of Twente was used.
Posted by T.L. Breyel at 9:07 PM