In 1945, two young men named Bob Bowman (who incidentally passed away earlier this year) and John Broger established Far East Broadcasting Company (FEBC). They had no financial backing, no supportive board, and no church denomination. With China in mind they aired their very first broadcast from Shanghai. But by 1948 all mission work in China was shut down. As an alternative site, operations resumed in the Philippines on medium-wave. International broadcasts to China started the following year in 1949 and have since expanded to cover most of South East Asia, as well as Russia, Ukraine, and Kazakhstan. FEBC’s sister organisation, FEBA, broadcasts programmes in Africa, the Middle East and India. Over 100 ethnic languages are broadcast over FEBC, covering a total 700 broadcast hours per day.  Iu Mien -- a Laotian dialect -- is one of the languages which I happened to catch just recently.  Whether one subscribes to FEBC / FEBA's religious convictions, their marketing effort to reach out to even these "hard-to-reach minority groups" is truly amazing.  73s! 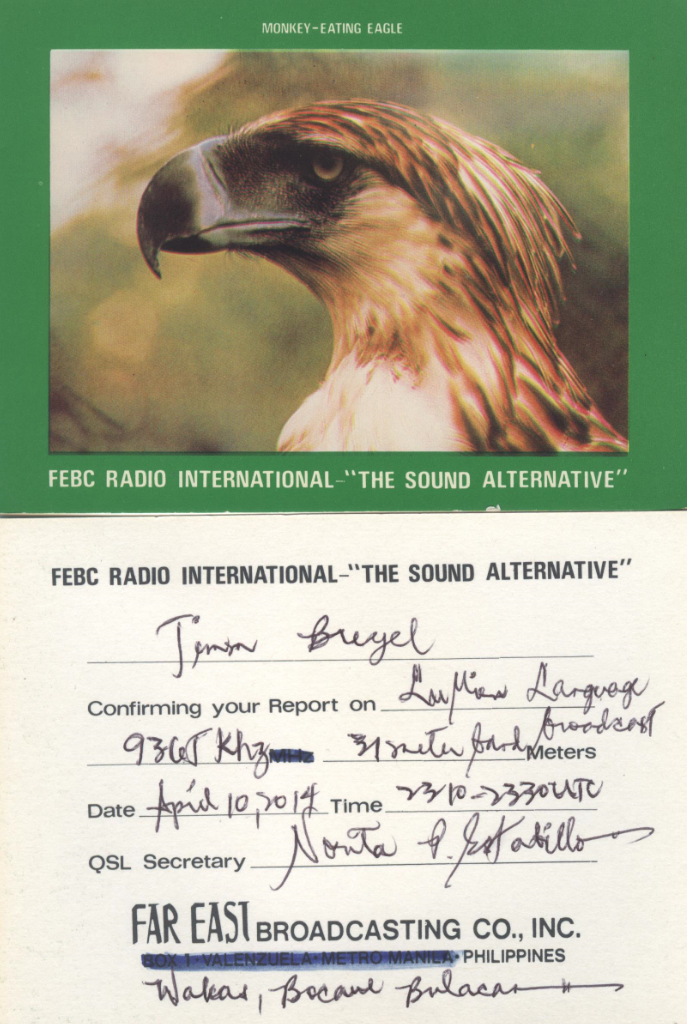 FEBC Radio, transmitting from Bocaue, Philippines, was logged on 10 April 2014. Christian evangelical religious programming with choral music in Iu Mien was monitored from 23.10 to 23.30 UTC (broadcast time 23,00 to 23.30 UTC). Reception on 9.365 kHz throughout the broadcast was (SINPO) 54445 -- excellent signal strength with minor transmitter noise, slight atmospheric noise and fading.

Reception report was emailed and submitted on-line the following day. This eQSL and QSL letter arrived on 14 April 2014, from veri-signer Nhorie Estabillo.