The Overcomer Ministry (via Nauen) 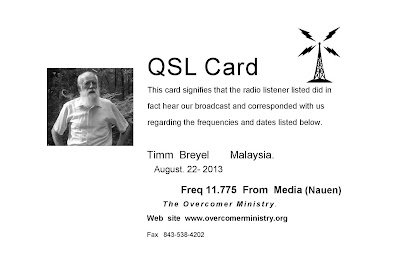 The Overcomer Ministry, transmitting from Media Broadcast  GmbH site in Nauen, Germany, was logged  on 21 August 2013. An English language broadcast from Brother Stair and others on American healthcare was  monitored from 20.15 until 20.45 UTC. Reception on 11.775 kHz (SINPO) was 34433 -- fair signal strength, good clarity with some fading.