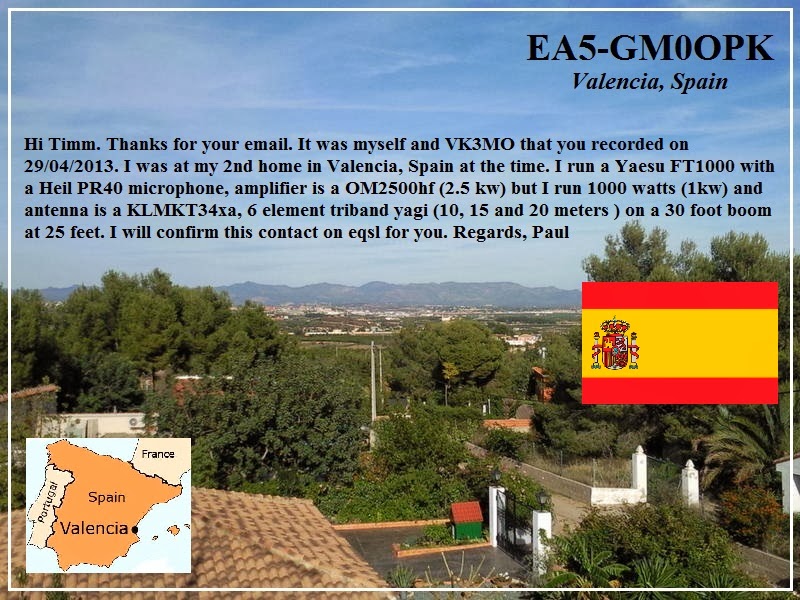 A sample of their transmission may be heard HERE. Radio operator EA5 / GM0OPK was later heard chatting with a K4SSJ (Kilo Four Sugar Sugar Jamaica),  although his voice was a mere whisper.

Reception reports were sent to both amateur operators after a kind amateur radio operator in Scotland (GM3ZDH) helped identify EA5 / GM0OPK. A confirmation was received from EA5 / GM0OPK a few days later. VK3MO was contacted by mail, and he never replied.

Numerous follow-up emails and assurances from Paul eventually garnered a QSL postcard from him. In all fairness to him, he attempted to send an eQSL but this failed to deliver through no fault of his own. He was also busy constructing a new home in Spain, and this contributed to the long delay. The above QSL is self-made and incorporates a photo of his home in Valencia (posted on QRZ) and the original email I received from him. On 10 June 2014 I received his confirmation on a postcard of Costa Blanca, Spain, posted from Glasgow, Scotland. A BIG thank you, Paul!!!