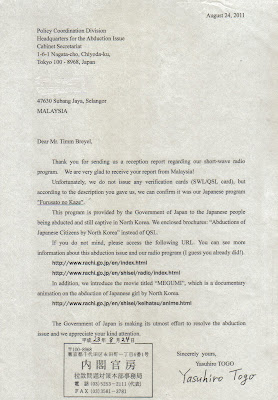 Furusato No Kaze (Wind of Hometown), a special-interest station targeting Japanese abductees held captive in North Korea, transmits daily from Tainan, Taiwan. Sponsored by the Japanese government this station was monitored on 27 July 2011 from 16.00 to 16.30 UTC on  9.780 kHz. Signal (SINPO): 43444 -- some interference from a station (Radio Portugal International suspected) broadcasting on the same frequency, but speech was strong and  clear.


This thirty minute broadcast entailed mostly commentary in Japanese, sound effects between reports and brief pieces of music. Programmes are designed to trace the whereabouts of Japanese citizens abducted by North Korea and eventually secure their release.


I have read QSL cards are not issued, but the station does acknowledge with a newsletter on the abductees. I received a verification letter on 5 September 2011, along with a couple of newsletters highlighting  the Japanese abductees and the objective of the Japanese government.
Address:
Secretariat of the Headquarters
for the Abduction Issue
1-6-1 Nagata-cho, Chiyoda-ku,
100-8968 Tokyo, Japan
Email:
info@rachi.go.jp