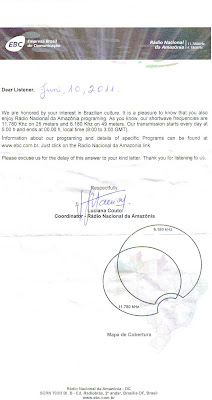 Radio Nacional da Amazonia in Brasilia, Brazil was logged on 28 March 2011 and monitored between 10.30 to12.00 UTC on 11.780 kHz. Programming was in the Portuguese language and entailed essentially a talk format with occasional Brazilian pop music interjected during the broadcast.
Signal (SINPO): at 10.30 UTC signal was 45344 - fair reception with some fading; at 11.00 UTC signal was 33343 - interference from nearby stations caused some modulation, but speech was still audible; at 11.30 UTC signal was 22232 - barely audible speech and a lot of modulation from nearby stations; at 11.45 signal was 11121 - too weak to discern speech; after 12.00 UTC signal was detected but just too weak and too much interference from nearby stations.
This is a rather remarkable find, considering Latin American stations are rarely heard in Malaysia. Moreover, their transmission is aimed primarily to northern Brazil. Receivers used to catch this station included a Grundig Satellit 750 (Tecsun S-2000) and Grundig Satellit 500, attached to a 1/4 wave antenna elevated at a height of 10 meters and fed through a 50 ohm coaxial cable linked to a MFJ-956 antenna tuner.

Reception report was submitted by mail and email. Letter and brochure were received on 24 June 2011 in lieu of a QSL card, which more or less confirms my reception report, I suppose.