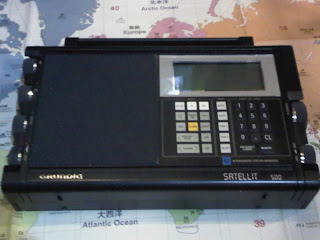 My new radio is an old Grundig Satellit 500 International (manufactured  between 1989-1991). It is one of the last German-engineered radios by Grundig assembled in Portugal.

My particular model appears to be one of the first sets manufactured in 1989. It does not feature the ROM chip for pre-set stations which were introduced in the Professional model after 1990, nor does it include the three lamps over the LCD which were featured in the late 1991 models.


On first impression the sensitivity is good and comparable to my Grundig Satellit 750/Tecsun S-2000 and Sangean ATS-909W. The AGC/MGC actually functions and significantly aids in improving reception by peaking the pre-amplifier. By pressing the MONO button and turning the tuning knob the input circuit selectivity can be trimmed, thereby reducing certain effects from a disturbing station. The Sync Demodulator, not Detector, acts as a fine tuner in 100 Hz tuning steps, thus dramatically separating most bleed over from any powerhouse station. These are features neither the Grundig Satellite 750 nor the Sangean ATS-909 possess,  and they do definitely help reception. 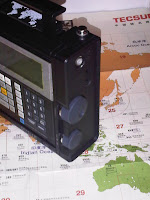 It is purported the CX857 detector chip utilised for the Sync Demodulator is the same as the Sony 2010 and Grundig Satellite 700. A switch with two pairs of contacts is all that is needed to make it function as a Sync Detector. Personally, I am happy with my Grundig Satellit 500 the way it performs and will maintain its original functionality.

If you wish to modify the Grundig Satellit 500's synchronous demodulator to a synchronous detector, you might consider the guidelines found on usenet (rec.radio.shortwave). The problem according to a Grundig Satellite 500 owner who modified it:"... is too high DC voltage at the output of the detector chip CX857. The situation can be considerably improved by connecting a 24-33k ohm resistor from each output (pins 7 and 8) to ground. If you don't have the service manual, the correct points are positive pins of electrolytic capacitors C825 and C826. These capacitors can be found next to the larger shielded box on the RF board, on the side close to the loudspeaker. After installing these resistors suppression of the unwanted sideband improved in my receiver from 14 dB to 20-26 dB, and I think the distortion is reduced too.


"Some hints for opening: the best screwdriver is Pozidrive #1. Ordinary Phillips does not fit well, and the screws are quite tight for the first few times to unscrew. The back cover should be lifted at the bottom side, there are plastic hooks at the top side. The RF board can be removed completely after unscrewing the 5 screws and unplugging all connectors. There MAY be an extra capacitor soldered between the RF board and the shield of the processor unit, in the vicinity of the antenna socket. It must be then unsoldered too. The board is manufactured using surface mount components, so certain caution and fine tipped soldering iron is necessary.


"The procedure should be undertaken only if you are sure that your detector is defective too. This can be determined by viewing the suppressed sideband signal of about 500 Hz with an oscilloscope connected to line output, it must be severely distorted. Another symptom is bad suppression of the unwanted sideband. At frequencies between 50 and 200 Hz there is another reason for the distortion of the beat signal: feedback from audio stages to the frequency of the first mixer oscillator. This can be improved by connecting a 2000 microfarad or larger capacitor from the AM +3.5 V to ground (pin 11 in connector A). The detector can be switched to selectable sideband synchronous mode also, but here rather strong phase noise of local oscillators creates clearly audible background (about 20 dB below audio). Also, the shielded oscillators exhibit strong microphone effect, resulting in audio feedback at higher volume. 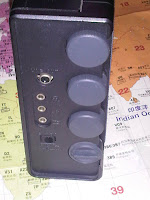 "To achieve this mode, pin 3 of connector C on the RF board can be connected to ground via about 1k ohm resistor and a switch. This resistor is useful only for avoiding extra interference from processor, also to avoid shorts in case of errors. For receiving normal SSB transmissions this connection should be broken. The unwanted sideband rejection can be further improved, but for this the service manual, a signal source (signal generator or a transmitter with clean carrier) and an AC voltage meter or oscilloscope is needed. The procedure is balancing the summing resistors after the audio phase shift circuits. Resistors in question are CR834/CR832 for LSB and CR833/CR831 for USB.


To give an idea of  my radio's performance with its 'unmodified' features, it matched my Grundig Satellit 750/Tecsun S-2000's reception of Radio Uganda (a 10 kw station) and Galei Zahal in Israel (a 10 kw station) from my home in Malaysia. While the Grundig 750 pulled in the station at higher decibels, along with a good deal of modulation splatter, the Grundig 500 with its Sync Demodulator was able to filter out much of the clutter and produce a cleaner sound. Still, it was quite an impressive feat for a radio more than two decades old.


Above all, this marvellous radio does what Grundig is famously noted for doing. Superb fidelity! It's 1.5 watt amp produces a warm, rich bass and treble fed through a single 7.5 ohm speaker. To appreciate stereo quality on FM, suitably designed headphones are required. Otherwise, all bands on the radio are processed in monaural.

The Grundig Satellit 500 is not a top-of-the-line short-wave receiver, but then it wasn't designed to be. For casual listening, slightly above average sensitivity and great sound, it does a marvellous job and will satisfy most radio aficionados.