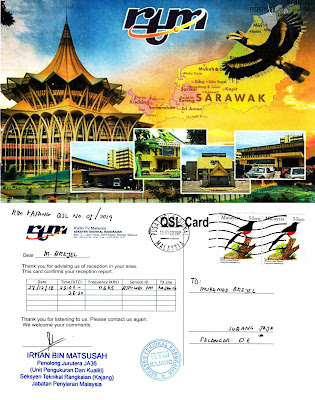 It should be noted at the time RTM's shortwave transmitters were down for routine maintenance. Times of operation were sporadic and signal was under-powered, barely audible from my vicinity -- 40 kms away from the transmitter site. HERE is Sarawak FM (Kajang), as heard at the time.

That said, a reception report was emailed on the following day. Multiple follow-up reports to various RTM personnel were emailed as well over the course of the next few months. Finally, on 9 January 2019, a scanned copy of a promised QSL card  was emailed. Now I await the paper version. The QSL card did indeed finally arrive in the mail the following week.