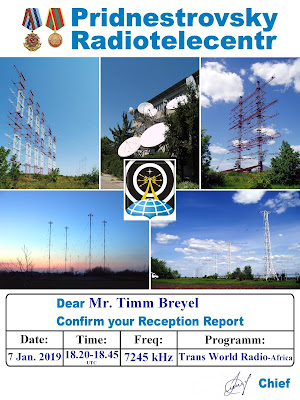 Trans World Radio Africa and Pridnestrovsky Radio Telecentre in Grigoriopol, Moldova was heard on the short-wave frequency of 7.245 kHz, here in the Kuala Lumpur area, on 7 January 2019, from 18.20 till 18.45 UTC. Religious sermon and East African music was observed in Tigre/Tigrinya. Reception rated a SINPO of 35443 -- fair signal strength, clear audio and slight fade, which is not bad for a transmission targeted to East Africa.

Reception report was emailed the following day to TWR Africa and Pridnestrovsky Radio Telecentre. An eQSL from arrived later in the afternoon. An eQSL from TWR Africa was received on 8 January 2019. 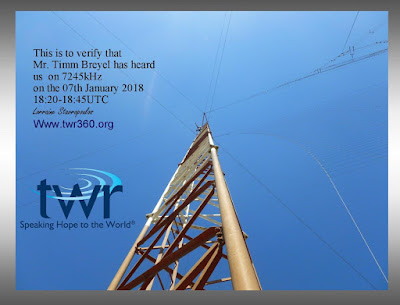