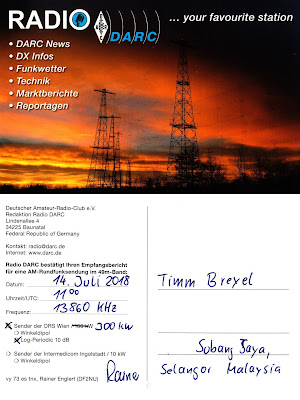 Special Broadcast of WRTC carried by Radio DARC, transmitting from Moosbrunn, was received on the short-wave frequency of 13.860 kHz, here in the Kuala Lumpur area, from 11.15 till 11.45 UTC (broadcast time 11.00 till 12.00 UTC), on 14 July 2018. While this transmission was intended for Europe and North America, bits and pieces of it radiated beyond its targeted areas. Reception at 11.00 UTC signal was not received. Only between 11.15 till 11.40 UTC was signal detected and observed with a SINPO little better than 14211 -- very weak signal, occasional bursts of coherent audio when not fading under severe atmospheric noise. By 11.40 UTC, signal worsened and was barely noticeable under the noise.

Reception report was emailed to DARC and WRTC on the same day. Follow-up emails prompted Rainer at DARC to reply with an email, stating a QSL card was on the way. QSL card and QSL letter arrived in the mail on 3 September 2018. 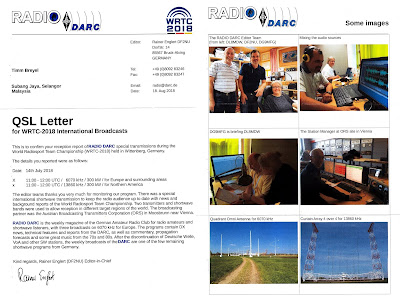