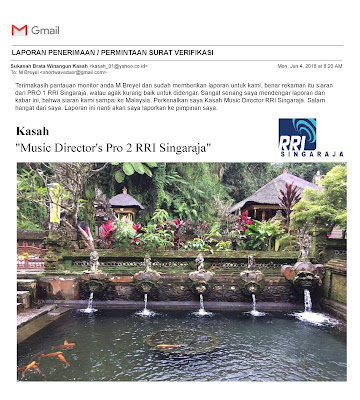 SINPO on 1080 kHz (MW) rated 34433 - strong signal, clear audio when not fading every few minutes under atmospheric noise, Subsequent days reception was a bit weaker at 24332 with fading, household electrical noise and  static bursts from a local thunderstorm. Interestingly, RRI Singaraja is received in Kuala Lumpur too, but usually with co-frequency interference from a station in Thailand. And, signal is best received in the morning, both in Singapore and Malaysia. Early evening RRI Singaraja is heard, but Interference from CRI is a problem in later at night.

Reception report was emailed on 1 June 2018, then followed up a few days later to additional email contacts and mailed to RRI Singaraja. On 4 June 2018, I received the following email confirming reception: "Thank you monitoring and giving the report to us, M Breyel. The recording was indeed broadcast from PRO 1 RRI Singaraja, although somewhat less good to be heard. I am very glad to hear this report about our broadcast to Malaysia. Let me introduce myself to you. I am Kasaan, Music Director, RRI Singaraja. Warm greetings from me. This report I will submit to my boss later. Kasah, Music Director's Pro 2 RRI Singaraja." Now hopefully a verification from the station itself will follow.