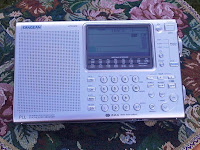 Reception on the short-wave bands continues to be buried in atmospheric noise. However, on the medium-wave band, a few surprises cropped up. mostly broadcasters from the Philippines, both a few that I have logged in the past and a few new ones.  Thai, Indonesian, Vietnamese, Chinese and Cambodian stations are observed regularly and were spread across the band on this particular night. A few regional All India Radio stations -- notably AIR Cuddapah and AIR Ranchi -- appeared after these stations had signed off, around 17.00 UTC. Without further fanfare, here's a look at some of the stations logged on the medium-wave band in central West Malaysia.

INDONESIA
Radio Republik Indonesia (Programa Tiga RRI Jakarta / Pro-3) with programming in Bahasa Indonesia was logged after 18.00 UTC. This station was first noticed last month when they covered the Vatican's Easter Mass.  Initially I suspected this was a station in the Philippines, but on further listening discovered it was in Indonesia. The Bahasa Indonesia translator was another tell-tale sign. Reception on 999 kHz is exceptionally strong nightly with a SINPO of 44434.

DZME-AM / Capitol Broadcasting Center, "Radyo Uno" in Bulacan Province (Manila area) was logged around 16.00 UTC with Filipino programming, mixing with a Thai Army station possibly in Chanthaburi Province. Reception on 1530 kHz rated a SINPO of 43444 for both station, with the Thai station having a slight edge in strength. After 17.00 UTC neither station was heard.

DZRH-AM / Manila Broadcasting Company (MBC) in Barangay Malanday, Metro Manila was heard around 17.00 UTC with talk in Filipino. Reception on 666 kHz rated a SINPO of 44433.