Isle of Music (via Kostinbrod) 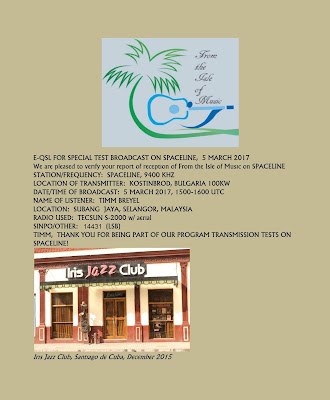 Isle of Music, in a "Test Transmission" from Kostinbrode (Bulgaria), was logged on 5 March 2017. Cuban classical, electric guitar, congo/trumpet and vocal compositions were monitored from 15.00 till 16.00 UTC.

Reception on 9.400 kHz was SINPO 14431 -- best received in LSB mode, but weak with fading, occasional and faint peaks of audio. As grey-line extended between Bulgaria and Malaysia, signal gradually improved, albeit still weak but with discernible music in LSB mode. HERE's how Isle of Music sounded in Malaysia.

Reception report was emailed shortly after transmission ended. Bill Tilford promised eQSL, which he emailed in less than 24 hours.