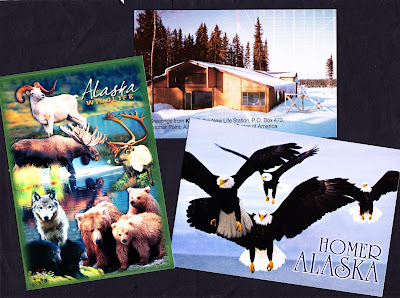 KNLS, broadcasting in Chinese from  Anchor Point, Alaska (USA), was logged on 17 November 2016. Religious  and contemporary living programmes, featuring a "Living Bible" radio drama, English language course on the usage of the word 'Bias' and music by Air Supply and Seals & Croft, was heard from 17.00 till 18.00 UTC. Reception on 9.655 kHz was SINPO 54554. 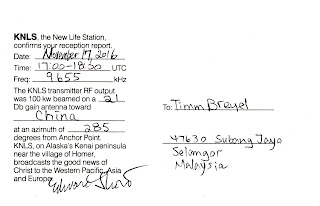 Reception report was emailed on the same day to several KNLS contacts. On the same day, Edward Short, Sr. Producer and one of the announcers for KNLS Chinese Service, replied with a nice email promising to send a QSL card. QSL card and postcards of Alaska arrived in the mail on 30 November 2016. A follow-up QSL card arrived on 6 April 2017.