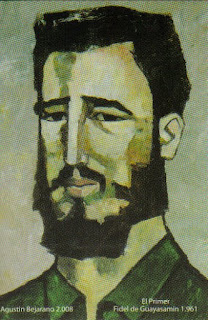 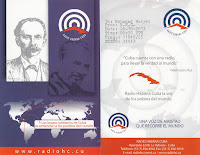 With the passing of Fidel Alejandro Castro Ruz (1926 - 2016), Cuban politician, dictator and revolutionary who governed the Republic of Cuba as Prime Minister from 1959 to 1976 and then as President from 1976 to 2008, perhaps it is fitting to look back at how he was portrayed in QSL cards and souvenirs from a few international broadcasters, chiefly Radio Habana Cuba and the Voice of Russia.

When I resumed the hobby of radio listening, one of the first stations to verify was Radio Habana Cuba. Aside from their QSL card, pocket calendars, often depicting Castro, were received over the years. He was equated with Cuban poet and independence leader Jose Marti in one card, and simply portrayed in others with his iconic beard, olive green military attire and cigar.

All of the pocket calendars of Fidel Castro were based on portraits painted by Oswaldo Guayasamín, an artist of Iberoamerica. The 2017 calendar was the fourth and last painting of Fidel Castro, which was made for his 70th birthday in 1996. The image entitled "Fidel with hands" carries the signature and a phrase from the historic leader of the Cuban Revolution, whose 90th birthday was celebrated on 13th August 2016.

Even the Voice of Russia offered a QSL card, depicting Fidel Castro and Ernesto Che Guevara with Yuri Gagarin. It was part of their 50th Anniversary Manned Space Flight series.

Love him or loathe him, Fidel Castro certainly stirred political waters, for good or bad, depending on one's convictions.
Posted by T.L. Breyel at 5:56 AM