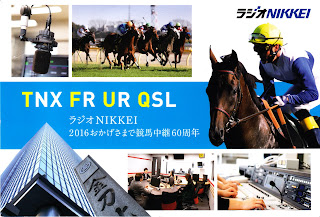 Radio Nikkei 1,  transmitting from Chiba-Nagara (Japan), was logged on 21 October 2016. A selection of uninterrupted Led Zeppelin music, particularly from their fourth album, was observed from 10.30 till 11.00 UTC. Reception on 9.595 kHz at the outset was (SINPO) 35443 -- fair signal strength and clear frequency. Unfortunately at 10.50 UTC, station splatter from China Radio International tuning degraded reception to 32442, at which point it became apparent CRI would soon  overpower Radio Nikkei 1. At the top of the hour, CRI did just that, even though transmission was on 9.590 kHz. 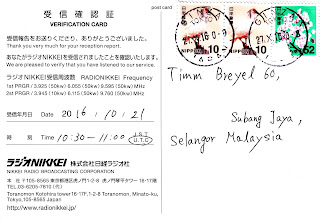 Reception report was emailed  and submitted online on the following day. QSL card arrived in the mail on 3 October 2016.
Posted by T.L. Breyel at 12:03 PM