Radio Sultanate of Oman, transmitting from Muscat (Sultanate of Oman), was logged on 5 September 2016.  Arabic music, station ID,  talking (presumably news) in Arabic from female and male announcers was observed from 17.15-17.45 UTC.

Reception on the medium-wave frequency of 1242 kHz was (SINPO) 23322 -- fair to weak signal with audible content when not mixing with All India Radio Varanasi and fading every three to four minutes. Prior to 17.00 UTC, Radio Sultanate of Oman was not received due to strong co-frequency interference from stations in the South East Asia region. HERE's how Radio Sultanate of Oman (MW) sounded in Malaysia. 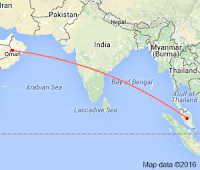 Radio Sultanate of Oman was first detected, along with AIR Varanasi, on 1 September 2016, each mixing at near equal decibel levels. Strangely, a month earlier, after 17.00 UTC, 1242 kHz seemed to be a clear frequency in South East Asia. Only Nippon Hoso-JOLF (Tokyo) was observed after 18.00 UTC. Why the anomaly? My guess is propagation. Either that or their transmitter is operating at the full 200 kW  capacity, rather than the reportedly reduced 50 kW output. Who knows? Maybe with the Hajj (Pilgramage) approaching, power has been increased temporarily.

In any event, a reception report with audio file was emailed, submitted online and posted to multiple accounts/sites/addresses, considering  the great difficulty in obtaining a verification (QSL) from Oman in recent years.