In conjunction with the 20th Anniversary of Radio Free Asia a new QSL card will be issued to commemorate the occasion. Listeners may obtain this recent verification card by simply submitting a correct reception report to RFA, The card will be available from September through December 2016. RFA broadcasts in Burmese, Cantonese, Khmer, Korean to North Korea, Lao, Mandarin (Wu dialect), Vietnamese, Tibetan (Uke, Amdo, and Kham), and Uyghur. RFA broadcast frequency schedule is available at www.rfa.org. With that in mind, I recently tuned in to catch a few of their broadcasts. 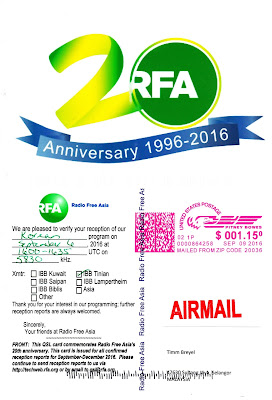 Radio Free Asia, transmitting from Tinian Island, was logged on  6 September 2016. A Korean language broadcast of current event reports about Korea and the region was observed from 16.00 till 16.35 UTC (broadcast time 15.00 till 17.00 UTC). Reception on 5.830 kHz was (SINPO) 23342 -- Poor signal strength, audible and clear speech with occasional transmitter noise or an attempt to jam signal, generally just poor propagation.

Reption report was emailed on 7 September 2016.