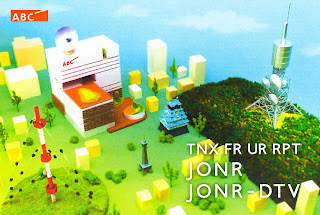 Asahi Broadcasting Corporation (Asahi Hoso / JONR), transmitting from Osaka (Japan), was heard on 13 September 2016, from 18.35 till 18.45 (03.35 till 03.45, Japan Time), on the medium-wave frequency of 1008 kHz. Their signal has been monitored for nearly a month and consistently just barely breaks the threshold with occasional peaks of audio, either Japanese speech or music, to rate an SINPO of 14331.  On this particular night,  their signal was was poor, with audible content when not fading every two to three minutes, and severely affected by QRN (static bursts) due to local thunderstorm. On other nights, either no signal or multiple stations are received. Timing is crucial. 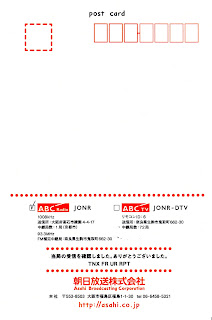 Reception report with audio file was emailed and posted to Asahi Broadcasting Corporation on the following day. QSL card and sticker was received on 6 October 2016. 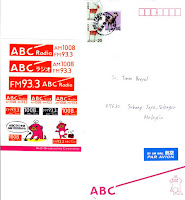