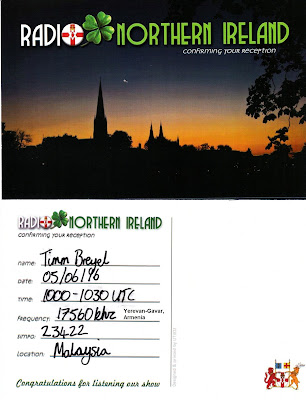 Radio Northern Ireland via Yerevan-Gavar, was received  directly in Malaysia, at 10.00 to 10.30 UTC, on 5 June 2016. A selection of rock songs by the Police, Led Zeppelin, Coldplay and others, along with SSTV transmission and station IDs/interval, were observed during this half-hour broadcast.

This was the good news. The bad news was the transmission on 17.560 kHz was weak to fair and severely affected by QRM station splatter from CNR in Beijing. Another 5 kHz up the dial and transmission would have been clear, albeit still weak. Overall SINPO was 23432. Transmission fared much better in eastern Europe and India, even Japan, certainly much better than in South East Asia. HERE's how Radio Northern Ireland sounded in Malaysia.

Reception report was emailed and submitted by Facebook Messenger on the same day. Jordan verified report and promised QSL card. Thank you very much for making this transmission possible for listeners in Asia, Jordan!!! QSL card arrived in the mail on 27 June 2016.