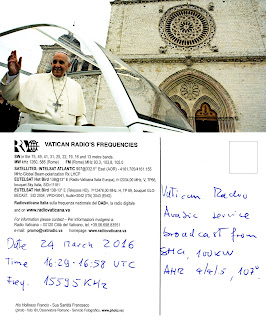 Vatican Radio, in an Arabic language broadcast from Santa Maria di Galeria, was heard on 24 March 2016. VR interval signal was noted just before sign-on, followed by ID "Laudetur Jesus Christus" in Latin, then Arabic. Religious related reports, presumably about Easter or redemption was observed, insomuch as the word "Rahmat" or God's mercy was mentioned. Two hymns were heard within these reports, which were presented by both male and female announcers between 16.29 till 16.58  UTC. Reception on 15.595 kHz was (SINPO) 34443 -- fair signal strength with minimal disturbance until about 16.50 UTC. At this point, signal weakened with significant fading to 24322.

Reception report was emailed to Vatican Radio on the following day. QSL card arrived in the mail on 4 May 2016.