PTHP Radio*, broadcasting from Channel 292 in Rohrbach (Germany), was monitored  on 13 March 2016, from 14.15 till 15.00 UTC. A selection of jazz, rock-n-roll and country & western tunes from the 1930s, 1940s and 1950s was heard during the broadcast. And what a marvelous collection of dixieland, blues, scat and swing jazz it was too! It was like listening to the 78 rpm records of my  grandfather's (who was a jazz musician in the late 1920s) and hearing  Louis Armstrong, Ella  Fitzgerald and the like, once again, many years ago. Wonderful, wonderful show!!! 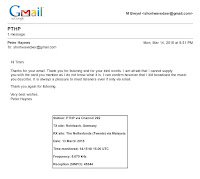 Reception report was emailed to Channel 292 the following day. On 14 March 2016, Peter Haynes  for PTHP confirmed the content of the broadcast heard on Channel 292.

*Transmission was received using SDR web-receiver in The Netherlands (Twente)
Posted by T.L. Breyel at 5:14 PM