Radio Slovenia 1 / Radio Koper*, transmitting from Ljubljana, Republic of Slovenia, was logged on 1 January 2016 (2 January 2016 CET). A Slovene  language broadcast of Slovenian pop and progressive rock music and news with frequent station IDs was monitored from 23.40 till 00.15 UTC (00.40 till 01.15 CET). Reception on 549 kHz was (SINPO) 54534 -- excellent signal strength received in the Netherlands, despite occasional fading and co-frequency interference from an Algerian station. Otherwise, audio quality was good and content clear. 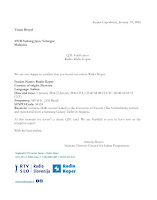 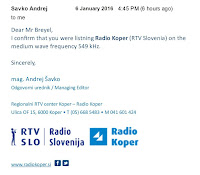 Reception report was emailed on 2 January 2016 and posted a few days later. On 6 January 2016, Andrej Savko, Managing Editor at Radio Slovenija/Radio Koper, confirmed report with an email. On 18 January, I resubmitted to Assistant Director General of Italian Programmes, Antonio Rocco, who confirmed the following day with an email, although the language stated on the letter was not Italian, but rather Slovene.

*Logged using a remote SDR receiver linked to the University of Twente (The Netherlands) website and monitored in Malaysia
Posted by T.L. Breyel at 7:21 AM