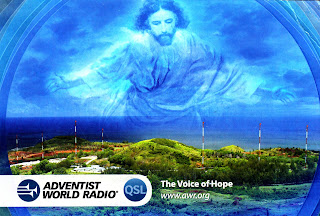 Adventist World Radio via KSDA, transmitting from  Agat, Guam, was logged on 16 January 2016. A half-hour broadcast of WaveScan was heard from 23.30 till 00.00 UTC.

Jeff White of WRMI followed up with a report on the HFCC Conference recently held in Brisbane, Australia. He interviewed Calvin Carter of Continental Engineering. Discussion highlighted DRM test trials from AWR in Guam and Vatican Radio, DRM receivers and India's efforts to promote DRM. Topics also included presentations from Australian and French radio regulatory bodies. There was also mention of future SENTEC sponsorship for the next HFCC Conference in South Africa. 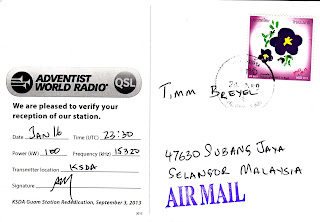 International Radio News rounded out the programme with reports about destruction of transmitters in India, temporary suspension of Djibouti radio broadcasts, AWR meeting hosted in San Antonio, TX and loss of a transmitter destined for an Irish Offshore station. A report about a special QSL card offered by AWR  for their SW broadcasts from New Caledonia in the 1980s ended this episode of Wavescan. Music from "Maggie" in the Cooke Islands was heard while contact details for WaveScan were announced.

Reception on 15.320 kHz was (SINPO) 55545 -- excellent reception except for minor fading early in the transmission

Reception report was emailed to AWR on the following day. QSL card arrived in the mail on 1 MArch 2016. Verification from AWR-KSDA via Guam has been received many times before. What makes this QSL card interesting is that it was posted from Thailand. Note the postage stamp.
Posted by T.L. Breyel at 9:34 PM