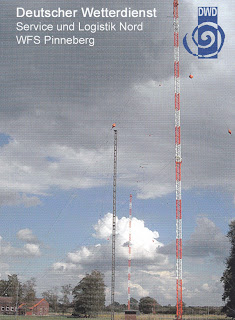 Der Deutsche Wetterdienst*, in a "test transmission" from Pinneberg, Schleswig-Holstein (Germany), was logged on 21 October 2015. A German language broadcast beginning with sign-on and station ID presented by female announcer, followed by male announcer presenting weather/atmospheric conditions for various cities, then lastly a female announcer closing with station ID and location, was observed from 06.00 till 06.10 UTC.

Reception on 6.040 kHz was (SINPO) 34333 -- fair, audible and discernible signal, despite persistent QRM hum from either their 10kW transmitter or co-frequency interference from a Brazilian station and atmospheric noise

HERE is how this transmission  sounded in The Netherlands

Reception report was emailed on the same day. Wilfried Behncke at DWD replied later in the day, confirming report and promising a QSL, stating: "Many thanks for your interesting reception report! Today I will send you a QSL-card."  Indeed, Wilfried did send a QSL card which arrived on 29 October 2015. 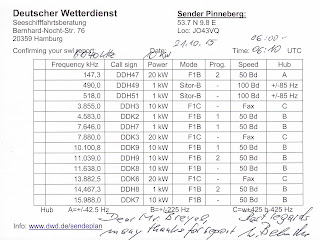 
*Logged from a remote SDR receiver linked to the University of Twente (The Netherlands) website and monitored from a desktop computer in Malaysia
Posted by T.L. Breyel at 2:33 AM