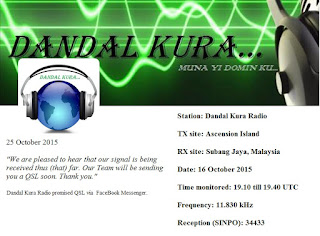 Dandal Kura Radio (meaning "Big Hall" in the Kanuri language), transmitting from the Babcock site on Ascension Island, was logged on 17 October 2015. Their Kanuri language broadcast is directed to Nigeria in efforts to counter the spread of Boko Haram. Content included largely dialogue and current event reports which were monitored from 19.10 till 19.40 UTC (broadcast time 18.00 till 21.00 UTC).

HERE is an audio file of this transmission later in the broadcast.

For more on Dandal Kura Radio follow this LINK.

Reception report was submitted on-line and message at their Facebook site on 17 October 2015. On 25 October 2015, Dandal Kura Radio replied by Facebook Messenger, promising a QSL card. "We are pleased to hear that our signal is being received thus (that) far. Our Team will be sending you a QSL soon. Thank you."