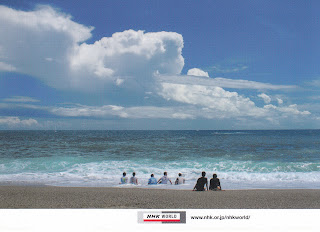 NHK World - Radio Japan, transmitting from Nauen (Germany), was logged on 15 September 2015. A Jazz programme, hosted by a Japanese speaking female announcer, provided commentary and music by female vocalist, including the songs "Take the A Train" and "Our Place. As many as seven different songs were heard between 17.20 till 17.45 UTC (broadcast time 17.00 till 19.00 UTC). Reception on 15.445 kHz was (SINPO) 35433 - fair signal with some atmospheric noise and fading, otherwise reception was clear and audible.

Reception report was submitted on-line to NHK world - Radio Japan on 16 September 2015. QSL card arrived in the mail on 16 October 2015. 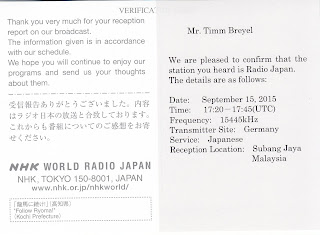