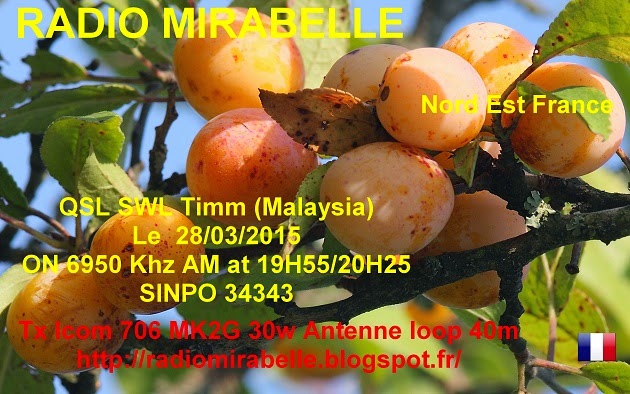 Radio Mirabelle*, transmitting from northeastern France, was logged on 28 March 2015. A selection of pop/rock songs by AC/DC, Queen and Scorpions, along with occasional announcements in French, was observed from 19.55 till 20. 25 UTC.

Reception on 6.950 kHz was (SINPO) 34343 -- fair signal, clear and audible despite atmospheric noise and fading; signal weakened slightly after 20.15 UTC, but still audible.

Reception report was emailed on 28 March 2015. The above eQSL arrived the following day.

*Logged using remote SDR receiver at the University of Twente (The Netherlands)
Posted by T.L. Breyel at 8:21 AM