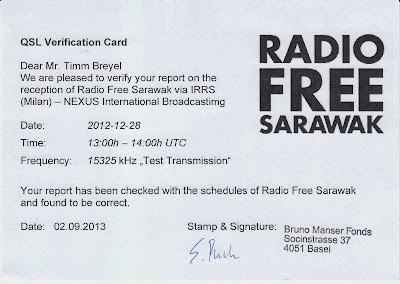 Radio Free Sarawak via IRRS (Milan) - NEXUS International Broadcasting, transmitting presumably from Tiganesti. Romania, was logged on 28 December 2012. A "Test Transmission" of music and political commentary (in Iban and Bahasa Malaysia) from 13.00 to14.00 UTC was received on 15.325 kHz. Reception (SINPO) at sign-on was 34333 -- fair signal strength with atmospheric noise and slight. By 13.35 UTC signal worsened to 34323 -- fading and atmospheric noise weakened reception, even though speech remained audible and clear.

I initially hesitated to record this blog entry, owing to IRRS-NEXUS and Radio Free Sarawak's inability or reluctance to QSL. RFS previously QSLed when they first aired, but subsequently failed to reply.

Nevertheless, reception reports were emailed to IRRS-NEXUS and Radio Free Sarawak shortly after the broadcast. A letter was also posted to IRRS-NEXUS. No reply was ever received, except for a computer generated message promising I would be attended to. 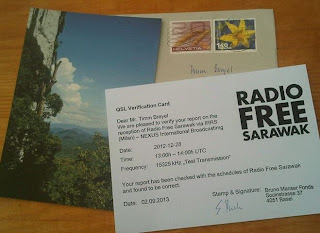 Finally, in September 2013, a fellow DXer suggested I contact the Bruno Manser Fonds organisation. He had recently received a QSL for a Radio Free Sarawak transmission. On 9 September 2013, I received this email message: "Your reception report is on its way... (I sent it last week). Best regards. Eva Ruch, Administration, Bruno Manser Fonds". From this account I conclude she means a QSL card is en route to me. A QSL card arrived on the mail on 11September 2013.