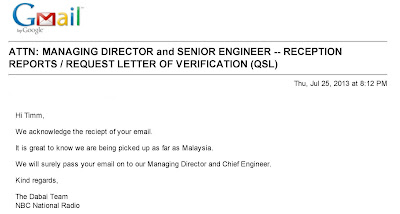 Last week I received a reply from The Dabai Team at National Broadcasting Corporation in Papua New Guinea. After several unsuccessful attempts to contact NBC and NBC Dabai, I followed-up with a less than polite message regarding the failure of NBC to respond to letters and emails over the past year. At the same time I resubmitted previous reception reports of their provincial stations: Radio New Ireland, Radio Manus, Voice of Oro, Radio East New Britain, Radio West New Britain, Radio West Sepik, Radio Madang and Radio Milne Bay.

NBC - Dabai Team emailed shortly thereafter promising to forward my reception reports to the NBC Managing Director and Chief Engineer. Only two NBC provincial stations (Radio East New Britain and Radio Milne Bay) have replied and verified after submitting self-prepared eQSLs. Never have I received a direct reply from NBC per se. So, this email came with surprise and hope. With any luck, someone will finally issue a Letter of Verification (QSL) for each or collectively for these provincial stations.