Reception report was emailed to Vatican Radio on 11 March 2013. Later in the evening, I received an email confirming with a promised QSL card. The actual QSL card arrived in the mail on 25 March 2013. 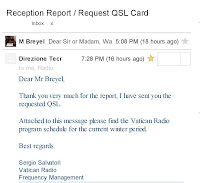