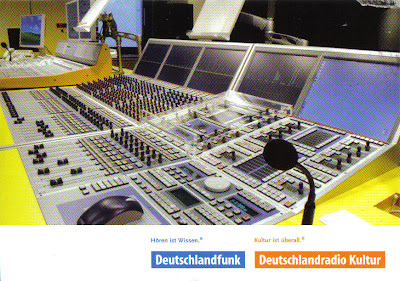 Deutschlandfunk,  broadcasting presumably from Berlin, Germany, was logged on 10 March 2013.  An Internet stream at 128 kps in mp3 format was accessed from DLF's website. A German language broadcast of classic Rock standards hosted by Udo  Vieth, followed by news/sports/weather, commentary from Thomas Oechsner and "Geistliche Musik" (Classical compositions) was monitored from 04.40 to 05.30 UTC (05.40 AM to 06.30  in Berlin).

A reception report was submitted on-line and emailed to Deutschlandfunk on the same day. A computer generated message immediatedly was received, indicating email had been received. This QSL card arrived in the mail on 20 June 2013. 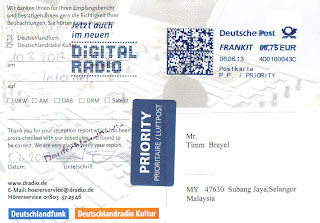