China Tibet Broadcasting / Voice of China Tibet --"Holy Tibet", transmitting from  Lhasa, China Tibet (Xizang), was logged on 6 July 2012 from 16.00 to 17.00 UTC and  24 May 2012 from 16.00 to 17.00  UTC. These English language broadcasts consisted of reports on Tibet and tourism promotion of  "Holy Tibet".  On 6 July, transmission  was received on 6.200 kHz. Reception (SINPO) was 35343 -- fair signal strength with atmospheric noise and fading,  otherwise clear and audible speech. On 24 May, transmission was monitored on  7.255 kHz. Reception (SINPO) was 44444 -- exceptionally good signal with minor fading and minor interference from presumably Belaruskayo Radyo 1.

Multiple reception reports were submitted at various times, both by email and post. Initial posts and emails were shortly after logging the station. Various email addresses stated on their website were used, some of which bounced. Letters were sent by air mail and registered mail. I was able to track the registered letter to Guangzhou. Afterwards, this letter could not be tracked, nor was it returned. A follow-up letter was posted in November 2012 from the United States, courtesy of a fellow DXer, but to date there has been no reply. Another follow-up letter in December 2012 was posted in China by a friend. It reached Xizang, according to the postmark, but a month latter it was re-routed to my address in Malaysia. Finally, on 28 January 2013, I emailed Ying Lian, at China Radio International, English Section. Within the same day, I received an email confirming the reception reports and promising to send two QSL cards.

This is not the China Tibet Broadcasting QSL I have long sought to add to my collection of QSLs, but it will suffice, at least for now. These QSL cards from CRI confirmed China Tinet Broadcasting. They arrived in the mail on 18 February 2013. China Tibet Broadcasting did FINALLY post a QSL card, along with a postcard from Tibet, only after the report was mailed from the US by a DX friend and sent to a postal address in the US, then posted to Malaysia. 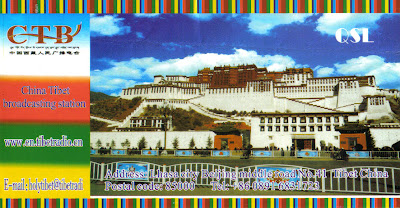 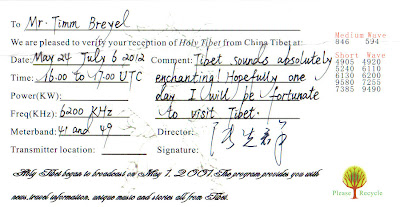