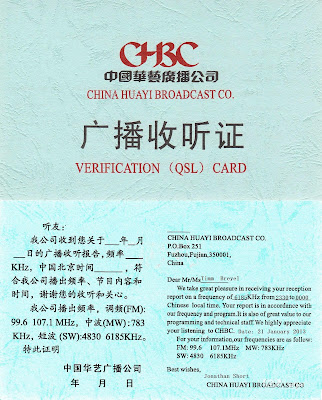 China Huayi Broadcasting Company, transmitting from Fuzhou, Fujian, People's Republic of China, was logged on 21 January 2013. A Chinese / Amoy language broadcast of news commentary and opera music just before sign-off was monitored from 15.30  to 16.00 UTC (23.30 to 00.00 China local time) on 6.185 kHz. Reception (SINPO) from 15.30 UTC until sign-off was 24212 -- weak signal, but clearly audible whenever signal faded in. Prior to 15.30 UTC, reception was blocked by Voice of Korea.

Reception report was emailed the following day. However, I am not certain whether it was routed through a SPAM filter or actually reached the intended contact. By 13 February 2013, all email attempts failed on delivery. Reception report was also mailed on 13 February 2013, addressed in English and Chinese. On 5 April 2013, I received this eQSL from verisigner "Jonathan Short". To protect his identity, I have removed his email address and the digital stamp from this eQSL. According to the email that accompanied this verification, all paper QSL cards are no longer in stock.