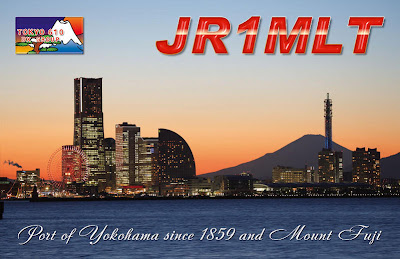 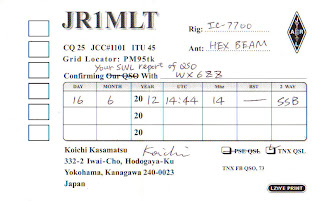 Amateur radio operators JR1MLT (Yokohama, Japan) and  WX6ZZ  (San Francisco, CA, USA) were received on 16 June 2012. Transmissions were monitored from 14.44 to 14.56 UTC on 14.244 kHz (SSB/USB mode).  WX6ZZ mentioned he "had an Elecraft K3, 4 element monobander and an ACOM 2000A amplifier that was pushing 1000 watts". Reception of JR1MLT (SINP0) was 25432 -- weak signal strength with no observed fading or interference, otherwise transmission was clear and audible. My guess is reception would have been stronger had his antenna been pointed southward; WX6ZZ was much stronger at 35433, assuming he beamed westward.

It would be great to get QSLs from these guys! A reception report was mailed to JR1MLT; whereas the reception report  to WX6ZZ was emailed. Shortly after emailing WX6ZZ on 16 June 2012, he emailed the following comment: "I will eQSL with you and see if I can send you a card as well." JR1MLT replied with this QSL on 5 July 2012; this QSL card from WX6ZZ arrived on 10 July 2012.


Thank you Koichi and Bill!!!