Wantok Radio Light in Port Moresby, Papua New Guinea was logged on 18 April 2012. Music and a religious sermon in English was  monitored: from 18.30 to 19.15 UTC on 7.325 kHz. Reception (SINPO) at 18.30 UTC was 25321 -- weak signal strength, occasional fading and atmospheric noise, nevertheless speech and music was audible at times. At 18.50 UTC reception improved slightly to 25332 -- fading was still present, but audio improved to actually discern the religious sermon. At 19.10 UTC signal weakened, atmospheric noise increased and nearby station splatter caused some interference, nevertheless faint music was detected, earning a rating of 24221. I was very fortunate to catch this station; so often interference or poor propagation had made previous attempts impossible. I was alerted to its signal by a SWL in Austria. I figured if he could hear a faint signal, I should be more likely to detect it. Bazinga! I did, and this is the result.


A reception report was emailed on the same day. After several follow-up emails, I received this surprisingly good news -- a rather large QSL card (approximately 7" x 5") and confirmation letter.  These items arrived in the mail on 28 June 2012. 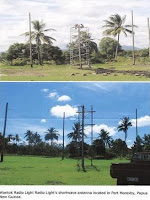 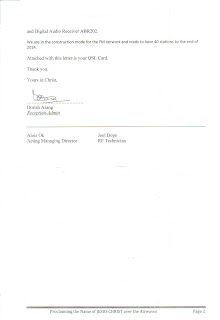 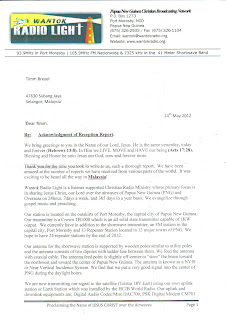