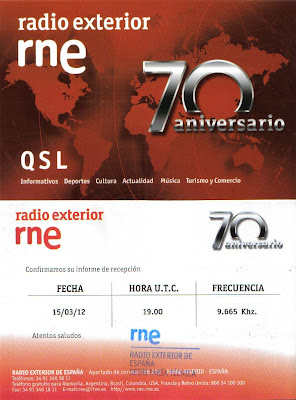 Radio Nacional de Espana celebrated their 70th anniversary on 15 March 2012. It was the 68th anniversary for Radio Exterior de Espana. To commemorate the event, REE's English language service presented a special tribute. This hour long broadcast (19.00 to 20.00 UTC) featured a discussion with past announcers, as well as letters and phone interviews with REE listeners.
During the broadcast a letter from yours truly was read on air. To listen to this letter, click here.
Unfortunately there was no mention of REE's plan to issue a new QSL card commemorating their anniversary, in much the same way many international broadcasters have done recently. I raised this particular matter with  English service announcer for REE, Alison Hughes, in this same letter, but it was edited out and not addressed. According to WRTH 2011, REE ceased sending out QSLs after 2010.  What a great pity if there is no 70th anniversary QSL!


For lack of a physical QSL, this letter and recording, therefore, will have to suffice as confirmation that REE was received on short-wave. Regrettably with many major broadcasters not issuing their QSL any more,  it is about all the proof a short-wave listener has to show for his effort. Hopefully -- as some fellow short-wave listeners have informed me -- a commemorative QSL from REE will indeed arrive in my mail box soon. Finally! REE sent this QSL card on 20 June 2012.
Posted by T.L. Breyel at 4:11 AM