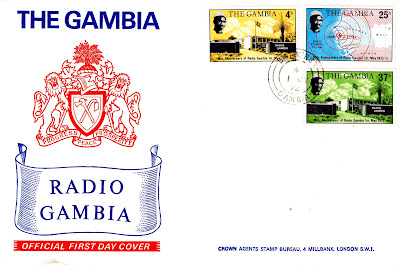 THE GAMBIA in 1972 issued a series of three first day cover stamps marking the 1oth anniversary of Radio Gambia. The stamps featured a map of their transmitter site, the studio and headquarters, whereas the cachet depicted the national emblem of the country.

Radio Gambia was the first media broadcaster of the Gambia following its establishment in 1962. Established during the colonial era with the assistance of advisors from Britain, almost all its programmes in its early years were rebroadcast of programmes in other parts of Africa and England. That strategy continued right after independence in 1965. Although it created its own news, educational shows and music programmes, Radio Gambia initially depended heavily on the BBC for programming.

HERE is  a link to their shortwave service in 1972. 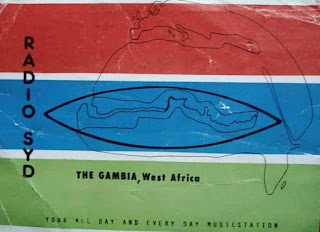 Above, a  QSL card from this period.