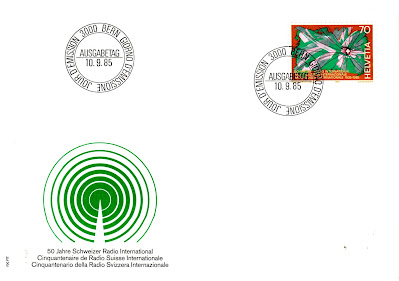 HELVETIA POST in 1985 released an FDC marking the 50th anniversary of Swiss Radio International (SRI).
Nineteen years later, on 30 October 2004, Swiss Radio International ceased to broadcast its shortwave and satellite radio programmes -- after nearly 70 years! Swiss Radio International first broadcast to the world on shortwave in 1935. The station made a name for itself as a neutral voice of authority during  World War II and throughout the Cold War. Programmes were broadcast in nine languages (German, French, Italian, Romansh, English, Spanish, Portuguese, Arabic and Esperanto). During this time, SRI established itself as one of the most high-profile and popular international radio broadcasters. The end of the Cold War, coupled with the advent of satellite technology and the internet revolution, spelled the end of the shortwave era for SRI.

I was one of many worldwide listeners who caught the broadcasts of SRI, first in the United States, back in the 1960s. Later, in  the 1980s and up until their last transmission, I listened in Malaysia where their transmissions were regularly heard, loud and clear. Since the end of SRI's shortwave service I have not bothered to catch any of their web-based content.
Posted by T.L. Breyel at 9:09 PM