Reminiscing about the Panasonic RF-45B 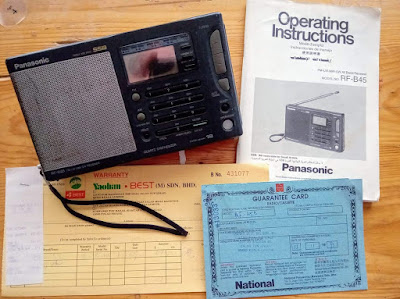 In November 1993 I purchased this Panasonic RF-45B from Yaohan's (a big Japanese Department store) in Kuala Lumpur. When new this digital PLL LW/MW/SW/FM radio sold for RM414 (about US$165). At the time, no Chinese-made electronics were available in Malaysia. Mostly Panasonic/National, Sony, Sanyo, Philips and Grundig made their way into the country.

About the same year I purchased the RF-45B, I had spotted a Grundig Satellite 650 at an electronics store, just next to Yaohan's. Unfortunately it was too expensive. And it didn't stay on the shelf very long before it was sold. So, by the time I made my purchase for a shortwave radio my choices were either Sony or this Panasonic model. I opted for the RF-45B insomuch as it was within my budget.

To give an idea how it was sold, the radio came with a 6VDC/220AC power supply, polyurethane case, earphones and portable wire antenna.  Shown here is a well-written English instruction manual (not so common with Chinese-made radios), warranty card and bill of sale.

For more than a decade it was a constant travel radio. And while I did not do much DXing then,  it was a decent enough radio to receive weak and powerful stations alike.

I still own the RF-45B, although it is now showing the wear and tear of its age. It still functions well on all bands, despite a slightly blackened LCD screen, a loose internal antenna, a worn power button, and non-black speaker grille. It remains one of my favourite radios, and it serves as a reminder of how well built these receivers were back then.