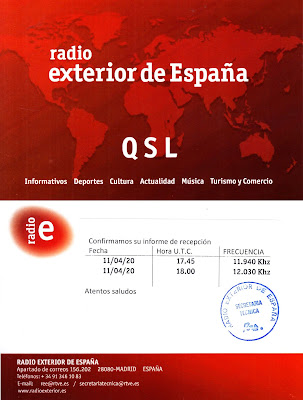 Radio Exterior de España, transmitting from Noblejas, Spain, was logged on 11 April 2020. Spanish language programming, including a report on how Covid-19 was affecting children and families in Spain, was observed from 17.45 till 18.15 UTC. Transmission was received on two frequencies: 11.940 kHz with SINPO of 45444 and 12.030 kHz with SINPO of 55555.

Reception report was emailed the following day. Shortly thereafter RNE replied saying a QSL card would be issued later when RNE headquarters, post office and airport reopened after Spain lifted a Covid-19 lock down. Finally, nearly a year later, I received their QSL card in the mail on 8 March 2021.