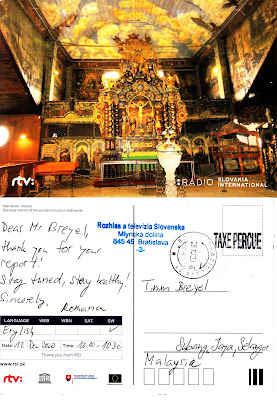 Radio Slovakia International* via Kall-Krekel, Germany was logged on 12 December 2020, here in the Kuala Lumpur area, using a remote SDR receiver in the Netherlands. Their English language was observed from 10.00 till 10.30 UTC. After news, "Slovakia Today" profiled the work of Slovak photographer Dizo Hoffman who worked for 20th Century Fox in the early years, then filmed the 1936 Olympics and Spanish Civil War. The segment touched on the death of his Spanish wife and his move to Liverpool, England where he photographed the Beatles throughout their career. This put him in contact with the Rolling Stones, Jimi Hendricks, Scott Walker, Marilyn Monroe, Marlene Dietrich, Frank Sinatra, Bob Marley, Marlon Brando and other luminaries. The second segment of "Slovakia Today" featured a report on the air pollution quality at the 41 sites around Slovakia. Reception on 6.005 kHz rated a SINPO of 55555.

Reception report was emailed on the following day. A QSL card was received  27 January 2021.