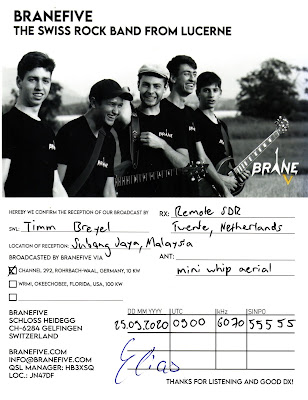 Channel 292*, transmitting from Rohrbach-Waal, Germany, was logged on 25 September 2020. A special QSL card from the Swiss Rock group BraneFive  for transmission of their debut song "Free the Animal in You" was heard at 08.58 UTC. An announcement and the song was heard on the short-wave frequency of 6.070 kHz, here in the Kuala Lumpur area, while using the remote SDR receiver at Twente University (The Netherlands). Reception rated a SINPO of 55555. HERE is Brane Five via Channel 292.

Reception report was emailed on the same day. Follow-up email from presumably band member, Elias, was received on 28 September promising a QSL card would be sent. It did indeed arrive on 5 January 2021.