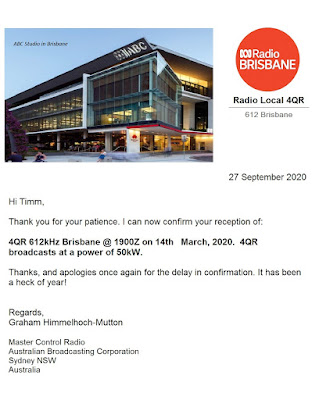 Australian Broadcasting Corporation - 4QR in Brisbane, Queensland on 612 kHz was logged on 14 March 2020. Or, it may have been ABC Radio National - 6RN in Western Australia. I suspect it is the 50kW station 4QR rather than the 10kW 6RN. While propagation was not particularly good, this station managed to pop up shortly after 19.00 UTC for about 5 minutes. Afterwards it was barely audible, and only in one or two second snippets after several minutes apart, all of which leads me to believe it was 4QR.
Reception report was emailed the following day. As Covid-19 cases increased in Australia ABC offices reduced staff and mail service. Even the veri-signer was unable to respond immediately due to his work load. I sent a few follow-up reports in the intervening months, then finally I received a verification email on 27 September 2020. Thank you very much, Graham! 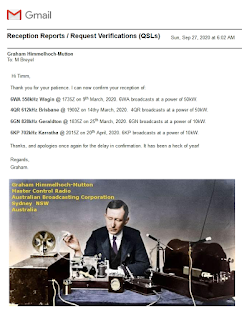