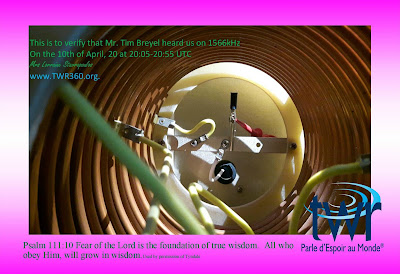 TWR Africa, transmitting from Parakou/Sérarou, Benin, was logged on 10 April 2020. Religious programmes with male and female announcers, occasionally music, was observed from 20.05 till 20.55 UTC. Reception on 1566 kHz rated a SINPO of 15111 -- weak signal with dominant carrier, occasionally faint audio just barely breaking above the noise threshold. Signal was initially present before 20.00 UTC and increased in strength after 20.40 UTC. No radio station in Asia-Pacific, Europe or Middle East operates on this frequency at the times stated, and if transmissions are present in the Asia region (particularly Philippines and South Korea) their signals should be stronger.

There reportedly is an Islamic station in the Philippines operating on 1566 kHz, but the content I detected was definitely not Islamic. HLAZ in South Korea at 250 kW also operates on this frequency, but generally their signal is much stronger and appears to be off at around 18.00 UTC, rather than the purported 24/7. Iran also is on this frequency, but generally Iranian stations are best received around 18.00 till 19.00 UTC, and lately Iranian MW stations have decreased. Other stations on this frequency are under 1kW. This frequency has also been monitored for a few weeks. My clue to check the frequency came when an Indian DXer in the eastern region of his country received the station. Lastly, my experience has been that African stations often reach Malaysia well after 19.00 UTC. After 21.00 UTC, most stations in Asia begin to sign-on.

Lorraine Stavropoulos, the TWR veri-signer, also concluded, "I think that the propagation must have been just right. To have heard our Medium Wave so far must be a miracle! But there is so much sea between us and if other stations were off the air at that time, then you heard us! Your program details prove that!" To back that up, I provided a few audio-video and audio files -- as poor as they were -- to demonstrate the fact.

Reception report was emailed on the following day. The above eQSL, along TWR programme schedule, was received on 15 April 2020.