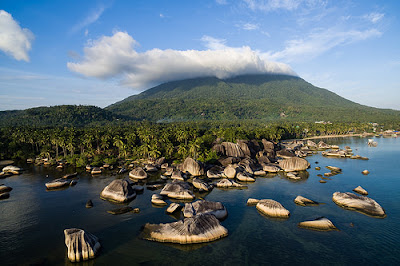 Radio Republik Indonesia Ranai PRO-1, transmitting from Natuna Regency archipelago in the Riau Islands, was logged during the second week of  February 2019.

After being alerted by Mauno, a renowned DXer in Finland, I tuned my radio to the medium-wave frequency of 1467 kHz. Although initially I was not 100% certain it was RRI Ranai, it definitely was not Radio Muslim AM which operates on this frequency as well. The programme format was similar to RRI with Indo pop music, national news from "Medan Merdeka Barat" and the RRI/Voice of Indonesia tagline "Suara Indonesia...Progresif..."

Signal was consistently detected around 11.45 UTC with Indo pop music, followed by a female DJ and time pips at 12.00 UTC, then an ID leading into news. Co-frequency interference from dominant Thai station (National Education Radio, Pathum Thani Province), also on the same frequency, was observed, but less noticeable when radio was rotated to an east-west direction. Signal continued to be heard after 12.30 UTC, but by this time it was much weaker between long fades. After 13.00 UTC, there was barely a whisper. And after 15.45 UTC, only All India Radio Jeypore and the above mentioned Thai station was received.

Why was the station suspected to be RRI Ranai? Alan Davies of Asiawaves.net reported that, "RRI Ranai was registered on 1467 kHz, but this was an old MW frequency." Here were a few clues that suggested it might be Radio Republik Indonesia Ranai. First, many Radio Republik Indonesia stations closest to my quarter (Kuala lumpur) can be heard just after 11.15 UTC; this mystery station was regularly received only after 11.45 UTC (15 minutes after sunset) -- its peak reception period. Secondly, on listening to the announcer, he mentioned, "dari Medan Merdeka Indonesia Barat (which is the HQ for RRI/VOI, Jakarta)," but this did not mean the station was in Medan. It was merely the PRO-3 national news from Jakarta. And if it was RRI Medan or RRI Jakarta, the stations would be received easily before sunset  in my area. So, perhaps, this RRI station was indeed in the eastern most region of Indonesia. Thirdly, a Japanese listener first logged the station at 18.00 UTC, on 10 February 2019, underneath a dominant NHK-2 station in his quarter. In my area only a suspected Korean station (KBS-1 / HLKN) was detected at the time. 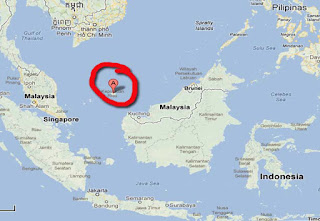 When reported back to Mauno he informed Alan Davies and provided my audio files as proof. Finally, on 16 February 2019, Alan Davies confirmed my audio clips were indeed Radio Republik Indonesia Ranai. HERE is my first clip. The station ID is heard about 40 seconds in "Masih bersama kami di Prosatu (PRO-1) RRI Ranai" before going into the news relay from Pro-3 Jakarta. HERE is my second clip. It is the transition from PRO-3 relay back into local programming with a local ID at the end that's not too clear: "Seratus lima koma sembilan (i.e.105.9), AM empatbelas enam tujuh (AM 1467), Prosatu (PRO-1) RRI (?Ranai)."

Why RRI Ranai (MW) has been reactivated remains a mystery. That said, I need to now contact Radio Republik Indonesia Ranai with a query and request confirmation from them.