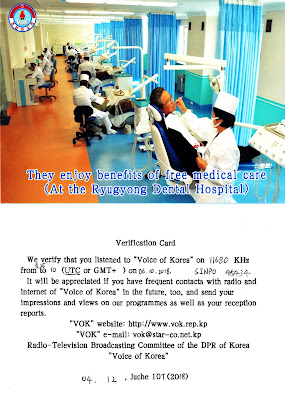 Korean Central Broadcasting Station  (KCBS) Pyongyang, broadcasting  from a 50 kW transmitter site in Kanggye, Democratic People's Republic of Korea, was logged on  6 October 2018. A selection of uninterrupted classical orchestral and vocal music was monitored from 05.25 to 06.00 UTC. Transmission was observed on 11.680 kHz. Reception (SINPO) rated 45434.

Reception report was posted to Radio-Television Committee of the DPR of Korea -- same address as The Voice of Korea. I am aware a Voice of Korea email exists, however, I have never received a verification card using it, whether it be for the Voice of Korea and KCBS Pyongyang. 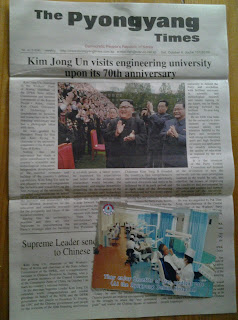 Address:
Radio-Television Committee of the DPR of Korea
Pyongyang, Democratic People's Republic of Korea
Posted by T.L. Breyel at 1:36 AM